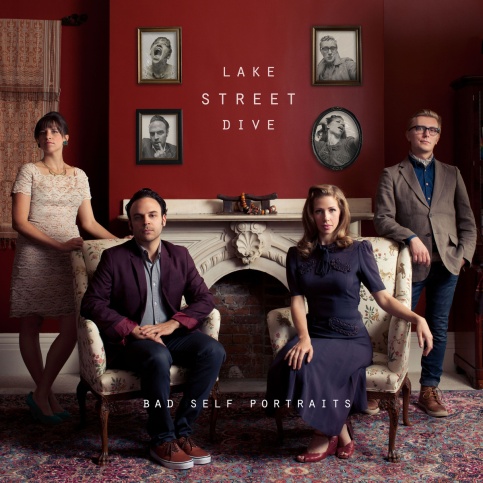 Seven weeks into the new year and already I’ve started compiling my Top 5 Albums of 2014 starting with these lovely folks and their excellent, brand new album Bad Self Portraits. Call it premature if you will, but then again this was the same band that made me totally reconsider my top concert picks of 2013 only moments before the end of the year, so it’s probably worth proactively saving them a spot this time around.

These guys are something special and you don’t have to look at their upcoming tour of sold out shows to know it.

The album is their second full-length record and is, at its simplest, a testament to what this band does so well: blending the sounds of 60’s Motown and early 70’s rock and roll with modern arrangements and sensibilities.

Suffice it to say this album is a treat. It’s a house party wrapped up and neatly delivered in a 40-minute package that’s vibrant and playful but won’t leave a mess, eat up all your food, or require you to power wash the premises when it’s over.

Producer Sam Kassirer’s contributions are nothing if not complimentary to the group’s talents, wonderfully extending the depth of every moment, both sunny and somber (of which there are a few– life’s not all fun and games, after all). On the track “Better Than,” for example, the steady dose electric piano and added light reverb on Rachel Price’s voice beautifully illustrate the isolation and sorrow felt by the song’s protagonist. On the flipside, the combination of layered horns and just a touch of extra electric distortion gives the driving, bluesy anthem “You Go Down Smooth” the juice it needs to take it soaring straight out of the stratosphere.

Most of the time, however, it’s not about studio enhanced wizardry or soundboard tricks– it’s about letting the band do what it does best: kicking the jams and having a good time. Nowhere is this more apparent than it is on the track “Seventeen,” in which the rich vocal work of Rachel Price, the explosive bass lines of Bridget Kearney, the cool guitar riffs of Mike Olson, and the deft percussive stylings of Mike Calabrese all share center stage. Add to that solid foundation some honeyed vocal harmonies, a clever application of syncopated hand claps, and even a breezy little vocal solo by drummer Calabrese, and you’ve got one serious groove machine that deserves every bit of its burgeoning following. Playful and flirtatious– that’s this band to a T.

At the end of the day, this band of fun-loving, talented musicians is first and foremost a band of friends: a group of individuals who met nearly a decade ago at the New England Conservatory in Boston and nearly immediately started working and playing together. Over the years their sound has changed (they originally formed as an alt-country/jazz band— who knew?), but their love of each other has not. It’s this love and friendship that shines through on every track of their album and in every performance and every show.

Whether charming audiences nationwide with a totally awwwshucks adorable interview on their network television debut, dressing up and paying homage to the 2-guy/2-gal bands that came before on Halloween, or just sharing their goofy moments with their fans in the in between time, this is one band who’s talents, chemistry, and energy will keep giving for years to come. I’d bet on it.

Lake Street Dive – Bad Self Portraits
Signature Sounds Recordings, 2014
Grade: A+
Listen Now: “Stop Your Crying”, “You Go Down Smooth”, “Bobby Tanqueray”, “What About Me”